A review of the major stress medications and their effects on the brain.

Stress is considered the epidemic of the 21st century. That is why many pharmacological investigations have tried to find a solution that involves the administration of medications.

Although what causes stress will hardly be solved with pills, psychotherapy being a totally necessary resource for the person to know how to deal with this emotion, the truth is that pharmacology is useful to treat symptoms.

Here we will look at all the main groups of stress medications that are used today and explain how they act on the body and some side effects and precautions to consider.

Next, we will see the main drugs for stress, grouped into anxiolytics, antidepressants, neuroleptics, and sympatholytics.

Among the pharmacological options that exist to treat anxiety disorders, anxiolytics are the drugs of reference. Their name indicates that they are designed to treat stress, especially when it reaches pathological levels such as anxiety. These drugs control physical symptoms, such as tremors, sweating, or rapid heartbeat.

Its mechanism of action consists of depressing the central nervous system, which causes the reduction of anxiety without the need to put the person to sleep, although technically, these drugs can be used for that purpose. Within the group of anxiolytics, we can find barbiturates and benzodiazepines.

Barbiturates are a class of medication assisted treatment that decreases the amount of central nervous system operation, resulting in a general state of rest in the body, while they cause sedation at moderate to large doses.

Despite being effective, these drugs are known to be dangerous since, in addition to being highly addictive, an overdose can lead to death. For this reason, its use has been reduced over the decades, and there are not a few psychiatrists who advise against its prescription.

Barbiturates can be used as a second option to treat insomnia when benzodiazepines have not worked well with a patient suffering from sleep problems.

Benzodiazepines, as with barbiturates, induce depression of the central nervous system, reducing nervous excitability. At low doses, they calm the person, while at high doses, they induce sleep and are used as a treatment for sleep disorders.

In generalized stress and anxiety disorders, they serve to reduce anxiety symptoms for a few hours. This effect is beneficial in the short term, but there is a risk that the patient makes a little responsible use of the drug, becoming addicted when consuming it very often; in addition that without psychotherapy, they do not help to solve the source of the problem.

The sustained and habitual consumption of benzodiazepines makes the body get used to this type of drug, making it more difficult to induce a state of relaxation over time and helping the patient to increase the dose.

In addition to stress and insomnia, benzodiazepines are also prescribed for muscle aches.

Some anxiolytics and their indications

Given that barbiturates have been used less and less, benzodiazepines have been gaining more prominence as the main therapeutic option for stress, and now we will see the uses of some of them.

Clonazepam is used to treat social phobia and Generalized Anxiety Disorder (GAD). Alprazolam, also known by its brand name, Xanax, is used for panic attacks, an indication shared with lorazepam and TAG. Buspirone is also used for GAD, although its therapeutic effects are not immediate. The patient must consume it for at least two weeks to begin to see results.

Another of the best-known benzodiazepines is Valium, a drug that alters the transmission of nerve impulses, which encourages the time needed to fall asleep, makes sleep longer, and, in addition, decreases the REM phase.

Since they induce sleep, anxiolytics are not indicated to be used before operating heavy machinery, such as vehicles. If this contraindication is not respected, there is a high risk of suffering a traffic accident.

Women trying to stay healthy should not take these drugs unless their doctor or psychiatrist sees that the benefits of taking them will outweigh the possible risks. Anxiolytics have been shown to significantly reduce the life expectancy of people in the elderly.

The name of antidepressants can give the misconception that their sole purpose is to treat the symptoms of depression, something that is not entirely the case. These drugs are also used for other psychological problems, including stress and anxiety disorders. Generally, antidepressants prescribed for anxiety are started at low doses, to be gradually increased.

This is its mechanism of action, contributing to an increase in serotonin levels in the central nervous system. This neurotransmitter is key to manifest euthymia, that is, to present healthy mood changes, which range from non-pathological sadness to joy, without reaching a manic state.

As with benzodiazepines, the antidepressants that are prescribed vary depending on the type of disorder that the person suffers and its degree of intensity.

This type of antidepressant increases serotonin levels between neurons, promoting anger, aggressiveness, and organic changes such as body temperature and the heartbeat ...

SSRIs are used, in addition to depression, for several anxiety disorders, such as GAD, obsessive-compulsive disorder (OCD) and social phobia, eating disorders (ED), and premature ejaculation. The most widely used SSRIs are fluoxetine, escitalopram, citalopram, paroxetine, and sertraline.

Although they are effective for all the disorders that we have mentioned, it should be noted that they have side effects, which usually appear between the first and fourth week of starting treatment. Among the most common are nausea, vomiting, and other gastrointestinal problems such as diarrhea—sleep problems such as drowsiness, and, paradoxically, insomnia. There may also be headaches, episodes of bruxism, that is, grinding the teeth.

Tricyclic antidepressants were originally synthesized as a treatment for allergies, although they were later found to have therapeutic effects for psychosis and depression.

This type of antidepressant, whose chemical structure is made up of three rings, prevents serotonin and norepinephrine reuptake, causing more amounts in the synaptic cleft and, consequently, regulating mood.

That is why they are useful for depression and anxiety disorders since, as with SSRIs, they help to have a euthymic mood.

However, they also have side effects, mostly due to their anticholinergic effects on the body. This means that bronchodilation, heart problems, sexual dysfunction, and weight gain may appear.

It functions by suppressing the influence of the monoamine oxidase enzyme. They have mood-like effects, as mentioned above. They have effects.

This type of drug's main precaution is to avoid consuming foods that contain tyramine, a substance that occurs in high amounts in fermented foods such as cheese and pickles. If consumed, the interaction of MAOIs with tyramine could lead to a stroke.

Neuroleptics, better known as antipsychotics, are also prescribed for stress and anxiety problems, as long as they are consumed in low doses. Some of the best known are risperidone, quetiapine, and olanzapine, used for GAD, OCD, and panic attacks.

Despite their effectiveness with these types of disorders, they are not considered a good option compared to benzodiazepines and some antidepressants since they have especially serious side effects. That is why its prescription is made only when the other options do not seem to be working, or the person has been diagnosed with an especially serious disorder such as schizophrenia.

Sympatholytics exert their action on the sympathetic nervous system by reducing catecholaminergic activity. That is why their main use is to be prescribed as hypertensive, although they are also indicated for anxiety problems, being mainly GAD, panic disorder, and post-traumatic stress disorder (PTSD). The drugs that are included in this group are the following:

As their name suggests, these drugs block beta-adrenergic receptors. This involves control over somatic manifestations associated with this type of receptor, which involves the sympathetic nervous system, such as palpitation, tremors, excessive sweating, tachycardia, and hot flashes.

However, this mechanism only affects the physiological rather than psychological manifestations of stress. They calm the physical but do not reduce, for example, anticipatory ideas or the perfectionism of OCD. Its action is merely symptomatic.

They are mainly guanfacine and clonidine, drugs that act on noradrenergic receptors. This causes the activation of neurons associated with panic disorder symptoms and other anxiety problems to be inhibited. How to Set Up a Bakery Step By Step 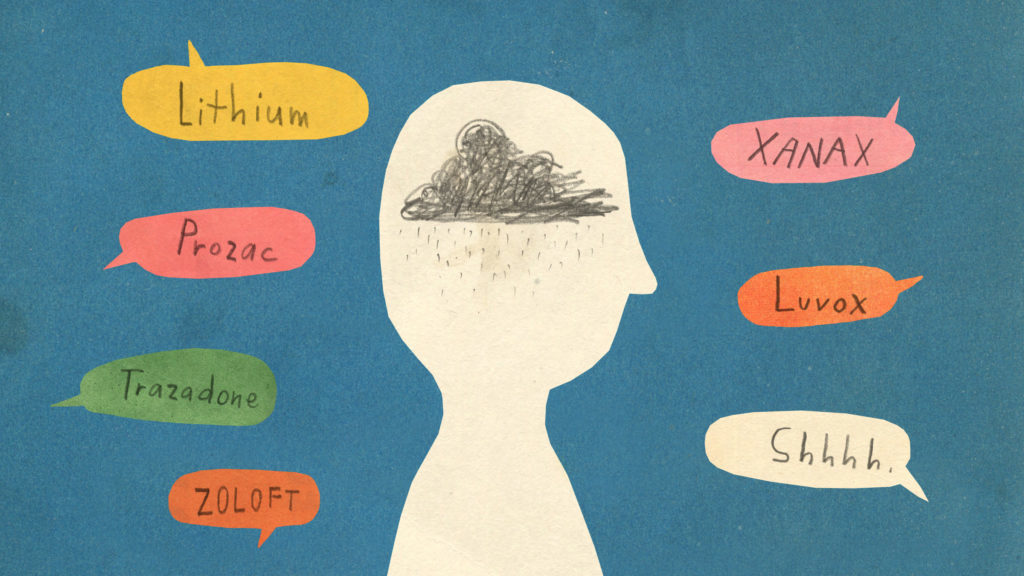 Medication for depression and anxiety